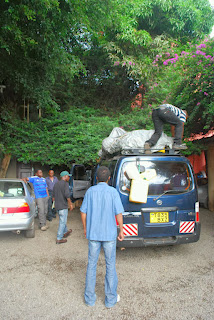 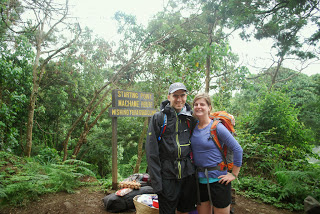 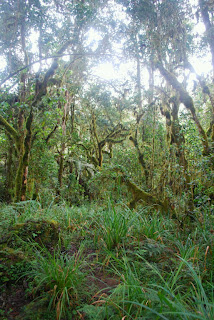 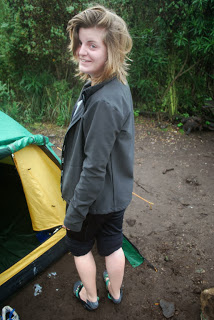 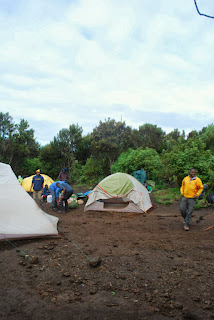 A little bit of backtracking: After several days of combined travel between taxi, train, airplane, and shuttle, we made it to Moshi, Tanzania. We flew from Joburg to Addis Ababa, Ethiopia and were anticipating an unfortunate and uncomfortable 13-hour overnight layover in the airport there. But we were pleasantly surprised when we were checking in at OR Tambo and the attendant said "wait, let me get you your hotel vouchers." Will and I looked at each other in confused awe. So step 1: Ethiopian Airlines is awesome. They put us up in a hotel room bigger than any I've ever stayed in before. The next morning we flew to Kilimanjaro Intl. Airport and were driven to Kindoroko Hotel in Moshi.

Back to the 13th. This morning we woke up and had breakfast on the roof, hoping to see the peak of our upcoming undertaking. Per usual, it was shrouded in clouds. We met our guides downstairs, loaded up the van, and made our way to Machame Gate. We drove through banana and coffee plantations up to the gate where we signed in and waited for our porters to unload all of the materials we'd need for the next 6 days. We began our trek around 11 a.m through the first ecosystem we'd encounter: rainforest.

As promised by its name and the regular weather patterns of the area, it began raining less than an hour after our departure. We suited up with rain gear and continued our uphill journey. The hike took us along a loose gravel path at the beginning, followed by a trail shared with thick and untamed tree roots for the rest of the time. We walked through some of the greenest foliage I've seen in quite awhile, with moss hanging from trees and birds calling to one another over the sound of the rain pouring down. My heels began to blister almost immediately, and a picture (one of several) of my wounded feet right from the start accompanies this post.

Today we learned our first Swahili word: "jambo" (jahm-bo) which means hello. I was immediately brought back to a pen pal letter written by one of my mom's students to my classes. The first line said "Jumbo! (Hello in African language)." All of the guides from the various companies seem to be good friends, so we heard and used it a lot.

Our two wonderful guides Jeff and Nico conditioned us to the phrase "pole-pole" (pronounced po-lay po-lay), meaning "slowly slowly." Being physically fit is not the biggest concern when making this trek: it's the altitude that could end up being the difference between summiting and not. We had to be reprimanded at least three times to go "pole pole" or else we'd be making it harder for ourselves to acclimatize later on when it really counts.

So we started to learn how to take our time. It's not like we were in a rush to get anywhere; we were only headed to our campsite for the night. By the time we did reach camp it was around 4 in the afternoon. Our tents were already assembled and our porter bags (containing things we wouldn't need during the day while hiking) were waiting for us. We settled in and had dinner a little while later. Our meal was unlike anything I'd expected: there was soup from scratch and more food than the four of us could finish and hot chocolate. Day 1: complete.