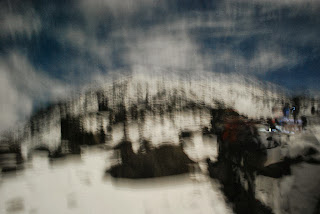 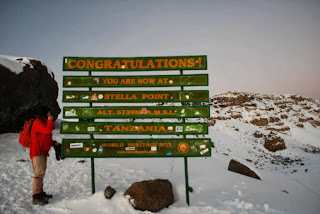 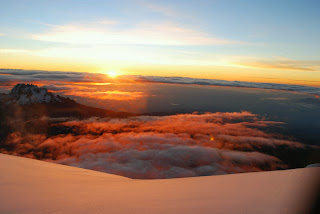 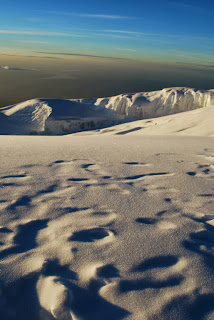 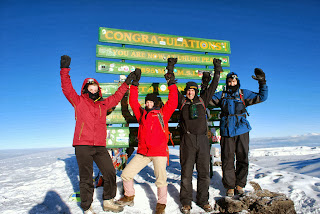 Today's account begins promptly at midnight. It actually technically begins when we woke up a little after 11 p.m, but we'll say midnight when we set off. I felt strangely awake for having had such a short time to rest and then wake up and get up in the cold darkness. I slept in most of what I had planned to wear for the summit because I didn't know if I'd be able to bring myself to get re-dressed when it was that cold. We went to the mess tent for tea and a small snack (I had to have something in my stomach to take my Diamox). The guides stressed that we eat and drink water as often as we possibly could because the higher we ascended, the less we would want to and it was crucial.

We packed up and started walking over a pretty level rock face on our way out of camp. We were put in order by the guides of where to walk: Jeff was in front, I was next, followed by Alicia, Will, Matt, and Nico at the back. The moon was bright, almost full, so we almost didn't need our headlamps. But I'm glad I had mine so that I could follow in Jeff's footsteps perfectly. I figured that if I kept up with his pace and footing, I'd be successful and not have any issues. If only this were the case.

The moon lighting up the fresh snow was amazing. I wanted to capture a picture of it, but it was difficult for several reasons. First off, I had my camera wrapped in spare clothes so it didn't freeze, and both the batteries were inside my sports bra to keep them warm and from malfunctioning. Second, we were told that if we take breaks, they must be quick ones because it was too cold and our toes might start to freeze if we stood in place for too long. And finally, without a tripod, the shutter speed was really slow and the pictures came out quite blurry. (One picture is attached to this post, and honestly, it does a pretty good job of capturing my general feeling through most of today).

We took a couple of water breaks within a few hours of leaving, and it's a good thing that Matt and Alicia packed a little more water than they needed: the hoses on the Camelbaks that Will and I were using froze, so we were water-less. The guides typically told us not to bring more water than we needed (3 liters for each daytime hike) because it would be unnecessary extra weight, but this time it was a good call. As we climbed, we saw little lights making zig-zag lines across the rising ground in front of us: other climbers that had set out earlier. I heard our UW friends singing a song back and forth about tacos. Feeling the presence of other people braving the same thing as us made me feel a little bit better.

The higher we go, the more my head begins to pound. My vision is actually beginning to pulse. I wished my handwarmer weren't stuck right in my palm: it's my fingertips that were cold and needed its warmth. We climbed some more and then took a short sitting break. It wasn't one that the guides suggested, it happened because I dropped myself down onto a rock. They said we should try to eat something. I pulled a Clif Bar from the side mesh pocket of my pack and almost broke my tooth: it was frozen solid, so I ate it like a hungry animal would, through the side of my mouth with my molars. We started walking again and I hurt all over. At one point, I actually would have rather curled up in the snow and got hypothermia than continue.

The snow kept crunching under my feet interspersed with the loose rocks that almost made me slip more times than I can count. I seriously started questioning what we were thinking when we decided to spend our hard-earned money and precious Peace Corps leave days on this ridiculous trip. People die making this trek. Should we have done more research? Did we train enough?

It was starting to get light behind us. Our first milestone was reaching Stella Point at 5739 meters above sea level. The light at our back was orange and pink. This will go on my list of most amazing places I've seen the sun rise; also on the list are on the summer solstice at Machu Picchu, as well as from the top of a church in Oaxaca State, Mexico. Jeff and Nico gave us high fives, and people coming back from the summit told us congratulations and that we were so close. But God did it feel like they were telling us a really cruel lie.

The distance from Stella Point to Uhuru Peak was only about 100 meters, but it felt like a marathon. Each step was harder than the one before it. I felt like all the people that we passed and said, "you're almost there!" were lying. We could see the sign at the summit, but it never seemed to be getting any closer. Finally we made it. Snapped some pictures and got the hell out. The guides told us that the plan was to get up there, take our pictures, and get back down as soon as possible. Which was good for me because I was actually deteriorating this time.

Jeff and Nico said that 5200 meters and below was the safe zone, and that between there and the summit was a zone where altitude sickness can have fatal effects. My head was pounding, I felt sick, and I was beginning to hallucinate, seeing pink tinged snow along the packed-down path. For awhile I thought maybe the snow actually was discolored, that some energy drink spillage was the cause. But seeing both sides of the edge of the path all the way down in this hue made me begin to think that my brain was seriously struggling.

This time arm in arm with Jeff, with one hiking pole in his hand and one in mine, we raced down through the altitude sickness zone. A few times I felt like I was going to fall. Jeff clasped my arm tighter. We ran and ran and even when I said I needed a rest Jeff said no; we had to hurry to get to the safe zone. We kept racing and were met by several of our porters, who were alerted and came to aid in my evacuation. We made it back to base camp and I just cried. I cried in front of all the porters, our whole team. Feeling so helpless and out of control of my own body scared me in a way that I have seldom felt before. Will and I went to our tent and he consoled me until I fell asleep for a little while.

The whole summit took about 8 hours total. After not having had much to eat or drink, we were able to eat a little bit of lunch, but only a little. The guys said to us "you are not eating!" and we could only respond with the excuse of the altitude. After packing up camp again, we began what would turn out to be a 5ish hour hike down to Mweka Camp at 3080 meters. We walked quietly for most of the time, through the desolate landscape of the day before. We passed some metal rickshaws used to seriously evacuate people down to the bottom of the mountain. I was thankful that I wasn't so paralyzed that I needed one of those.

We went down and down and down. My glutes hurt so bad that I made Will wait up for me so I could use his shoulder as support for me to take a step down. He said he reminded me of his grandmother. Trust me, I felt like I had arthritis.

At the gate, there was a poster with all the different species we may come across over the course of our trek. I thought the shrews were the funniest looking, and therefore hoped to see one. Jeff and Nico told us that they were very rare to see and that I shouldn't count on seeing one. On our way down, I saw a baby shrew. It was adorable and looked so fuzzy. It made me smile for the first time all day. Thank you, baby shrew.

The other best part of the day was when we reached our camp. I lowered myself down onto my sleeping mat with my muddy boots outside the door. We ate dinner and went to bed as soon as possible. It's been a day for the books.