Day 2: Into the Clouds 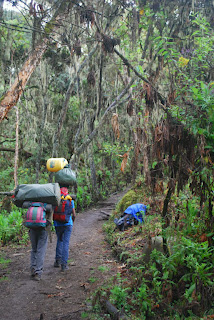 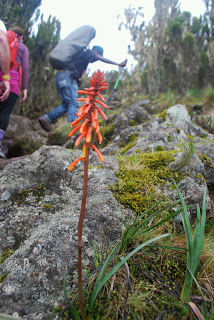 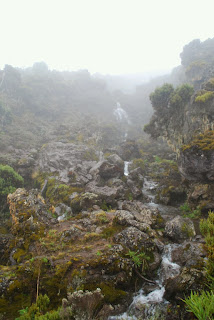 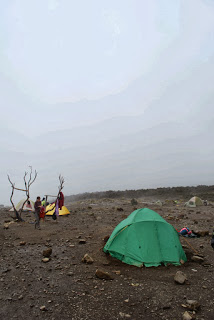 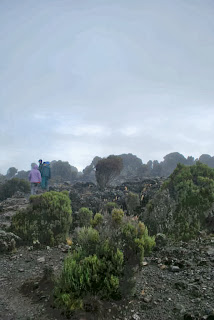 At last night's dinner briefing, we were told that breakfast would begin at 730 a.m and we would leave camp at 8. There was no need for an alarm, because we were awake before 6 anyway. Between sleeping in a tent and being on a Peace Corps sleep schedule that has us up with the sun, we were ready before breakfast.

Leaving camp and beginning our ascent took us into our second ecosystem: the Heatherland. This leg of the journey took us through areas of mossy trees, scrambling up rocks, and crossing seasonal rivers. Jeff and Nico told us that today's trek would include some 3-point climbing, and when we reached that point in the day I thought about the Wild Thornberrys Playstation game I played as a kid. Specifically, one level where you're Eliza or Darwin and on a rock face and have to maneuver back and forth to not get hit with whatever is being thrown down from the top of the cliff. This was much more exciting than Playstation.

We turned around at some points to check our progress but couldn't see how high we'd gone because the clouds were rising out of the rainforest. The visibility close was fine, but distance and height weren't clear. Again, it was rainy and rocks were slippery. We took our time with the ascent. Pole-pole.

We spent some time talking to Jeff on our slow walk up. He told us that sometimes he tries listening to rap to work on his English. But that most of the time he doesn't understand anything American rappers are saying. Will's dad Matt assured him that we're in the same boat half of the time.

Amidst doing some Peace Corps Goal 3 (sharing American culture) we learned a couple more Swahili words. Asante (ah-san-tay) means thank you, and karibu (kah-ree-boo) means welcome or you're welcome. Habari gani means how are you? Nzuri means I'm fine. And adding "sana" to the end of something means a lot or very much, ie Nzuri sana means I'm great, or doing very well. I like learning these new words and putting them into use while on the trail. I really dislike traveling and not knowing any of the local language. Also, I think the guides and porters appreciated the effort on our part. And some of the Lion King is in Swahili, so that'll be fun to go back and watch sometime and put my newfound knowledge to use.

By the end of the day when we reached Shira Camp, I had a building pressure in my head that I couldn't seem to shake. I don't get headaches all that often, so it wasn't the best sign. Additionally, I can't find a simile to describe how sore my glutes are. They've actually never been in quite so much pain before. Falling apart on day 2.

We met some grad students from the University of Washington and chatted with them about Peace Corps. They were really interested in what we do, where we live, what we struggle with. 2 of them were actually on the same flight as us coming in. We talked on the plane too and found that we'd all be on the same Route for the same number of days, so hopefully we'll run into them again along the way.

I neglected to write down what we had for dinner each night, but rest assured that it was delicious and took time and talent to make. We went to bed full, sore, and ready to recharge for whatever the next day had in store for us.