Day 4: Get Ready for "Breakfast" 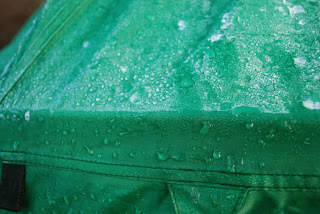 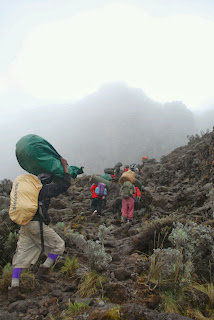 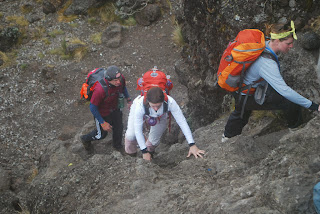 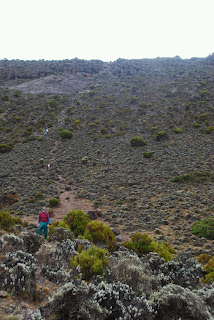 First off, don't be fooled by today's stats. We didn't just descend 100 meters. There was quite a bit of up and down today, up to a maximum of 4200 meters at one point. But I'm getting ahead of myself.

This morning we experienced two new things: first, we awoke to a layer of frost on the outside of our tent flaps. (You think this is cold? You haven't seen anything yet.) And secondly, we were reminded of what a sunny morning looks like. After a full night's sleep, I feel kind of like a new person. We all make our way to the mess tent, with its door open and facing Barranco Wall across the valley where we saw the rainbow the afternoon before. Jeff walks in and says "oh good, you're all ready for 'Breakfast.'"

We watch the brightly colored dots moving horizontally along the wall across the valley. Some of them are hikers who have got an early start, and some of them are porters. After eating breakfast, Jeff tells us that we'll be doing the same as those dots that we're eyeing in disbelief. Barranco Wall, so-called Breakfast because it's what we tackle right after our meal, is the big undertaking for today. It's all about three-point climbing and going extremely pole-pole in the process.

Right before leaving camp I take my first Diamox of the day: it has to be taken immediately prior to some sort of physical activity. We set out toward the Wall, crossing a few streams before beginning our climbing for the day. It's on this day that we were really given an opportunity to admire and be gracious for our porters. Before beginning, we were told that today would be the most difficult part thus far on the trek. We'd have to go slowly and pay attention and be careful. We had to have three points of contact with the wall at all times. The porters made it look like a walk in the park. While we held on for dear life with each step horizontally up, they carried our bags and gas cans for cooking and tents and woven bags on their heads without a second thought. They used no hands and had impeccable balance with each step forward, often taking a steeper and more challenging path up than those of us with a light daypack firmly secured around each arm.

When we reached the top of the Wall, we looked down and saw Moshi where we began this adventure, which both looked and seemed so far away and long ago. As we climbed, I thought about how happy I was with the Columbia snow boots my mom sent from the boot closet at home. At first I thought they would be too bulky, but besides the blisters they gave me that at this point were just red and raw skin, they were holding up pretty great. I had spoke (or thought) too soon though, because when I took a seat on a rock for a water and Clif Bar break, I looked down and saw that my left boot had a huge tear right along the seam. On a particularly jagged section of the wall, I'd heard a noise at my feet but just figured it was the bottom rubbing against something wet. Our UW friends were at the same point, and invited me to join their boot repair club once we reached the next camp. The guys said they had some super glue and had done the same type of maintenance the evening before on their own boots. Matt, being the fixer of any and all things, performed emergency surgery right then and there, using silk medical tape to hold the boot wound shut until we reached camp.

We continued on and saw the same colored dots from earlier that morning, meaning that camp wasn't all that far away. Except for the part where we first had to tackle the steep and muddy descent, cross a river, and then do the same steep climb back uphill with some rock climbing thrown in. No big deal.

Somehow nobody slipped and fell going down and (still with the sorest glutes ever, speaking for myself) we trudged up to the top and found our campsite already assembled. After this afternoon's so-called Diamox Hike (got to do physical activity after taking it for it to kick in), Matt performed some more surgery, this time wrapping tape around several times and then under to hold it securely in place. As with Nemo's "lucky fin" that was small but nonetheless powerful, so became my "lucky boot," damaged but in it for the long run.

Today was the first day that I washed my hair since the night before we began the trek. Will's mom sent over lots of goodies, in the form of granola bars, body wipes for when there is no shower, and for me, a moistened shower cap with instructions on how long to keep it on your head and lather to "clean" your hair. When I was finished, I kind of wished I had just left my hair as it was. I had it pulled back and in a bandana every day, and it's not like I was sweating because it was too cold. It smelled kind of nice(r), but just ended up feeling sticky-ish. But it's the thought that counts. Thank you, Ingrid!

We all felt a little off after the Diamox Hike and after dinner, called it a night in preparation for the next day's journey to base camp.