Day 5: On the Moon/ To the Bottom of the Beast 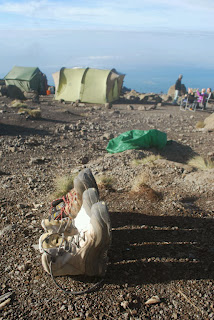 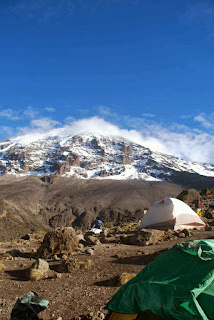 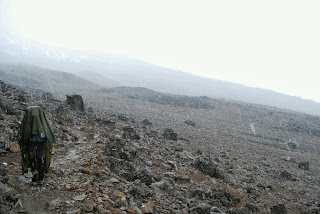 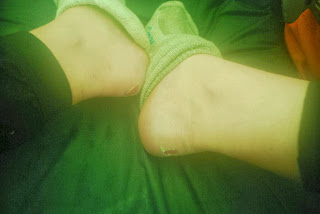 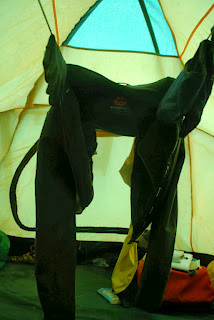 When we woke up we could see the Peak. By the time we had breakfast and saddled up for the day, we were once again shrouded in clouds and fog. After walking only a minute or so upwards, the tents that were left at camp were gone from view. We were once again walking through a grey, fuzzy-seeming landscape because nothing is in focus because of all the fog.

The present environment is referred to as an alpine desert, so kind of like what I'd picture the surface of the moon to look like. It's just rocks wherever you look: jagged ones, round ones, big ones, small ones. Rocks. And then it just started to snow. For hours.

This day was nothing exciting and we saw nothing beautiful or intriguing. By the time we made it to the office at base camp to sign in, all of our porters were on the porch taking shelter from the cold snow/ sleet. We had to wait to be told where we could set up camp, so we spent that time sharing trail mix with our team.

When we had a tent pitched, we dove inside only to find that it wasn't all that much warmer and our sleeping mats were quite wet. We were also covered in layers of wet clothing, so I took the extra shoelaces that Will's mom sent and made two clotheslines in our already small living space inside the tent. Will thought they were annoying, but I know that he was happy to have slightly drier glove liners and socks when we had to leave the tent to venture to the "toilet" or the mess tent.

Upon first entering the tent, we heard the light pitter patter of frozen water hitting the roof. After a little while we heard nothing and thought it might be safe to step outside. We slowly opened the tent door and were greeted by blinding white; the sleet had stopped and now it was just snowing. Hard.

I found a Sudoku book in my Books for Africa shipment and took it along on the trip, which turned out to be a really good idea considering all the down time we had. We waited out the snow by doing yet another puzzle, a medium level one where we passed the book back and forth at each turn.

As we were at the summit base camp, we had a special afternoon lunchtime briefing on the protocol for our summit. We would eat an early dinner, go to sleep around 5 p.m, wake up a little after 11 p.m, eat a snack and have tea, and then begin climbing at midnight. As we saw each day that we tried to look at the summit, it was always covered in clouds. If we wanted to see it clearly, we would have to walk through the night and get there early. My account of Day 5 ends here.