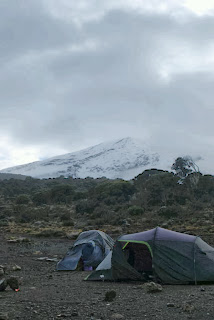 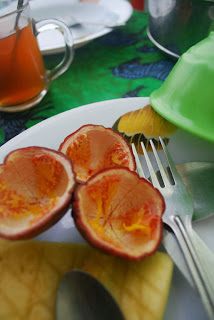 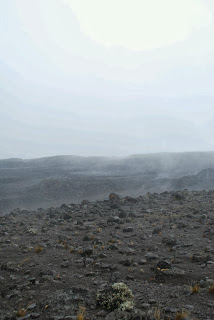 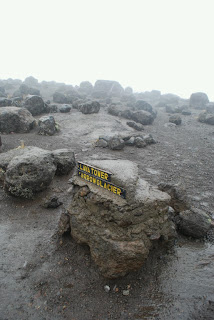 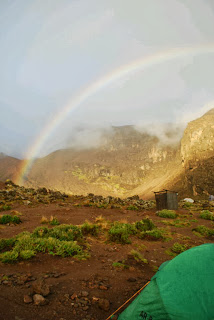 Last night I had a dream that I was at some open-mic type place singing along to my favorite song by Katie Herzig called Charlie Chaplin. (www.youtube.com/watch?v=vP5lbEe5TAE&desktop_uri=%2Fwatch%3Fv%3DvP5lbEe5TAE) Briana was there too, playing guitar. Then I woke up. That was the best part of the day.

The stats posted above show us climbing and then descending again. You may wonder why not just stay at that higher elevation and then continue on up? Today we were introduced to the practice of "climb high, sleep low." The idea is to introduce your body to what it feels like to be at a higher altitude so it can begin to adjust, but then sleep lower because the higher the altitude, the less sleep you get because there is less air.

So we start out walking and the pressure in my head is back. I took some painkillers to hopefully help it subside and pushed on. Today is miserable in more ways than one. Not only do I feel like inside my head is expanding with no place to go, but what we're walking through is just so unwelcoming. First off, it's pouring and super cold. And then to top it all off, the landscape we're walking through is this lonely, desolate, desert wasteland. It's empty, freezing, uninviting.

The closer we got to Lava Tower the more I hoped sitting down and having something to eat would help me get better. We made it up there and I went over to some sheltered rocks to squat and pee. After standing back up all the blood rushed to my head. I walked past all the little four-striped mice scavenging for food scraps, back to our group. When I made it there, I sat down (more fell down into a seated position), put my head in my hands, and cried. I felt like my head was going to explode, and like I was going to throw up even though there was almost no food in my system, and my layers were soaked through and it was cold. Will's aunt Alicia later told me that my lips were blue and the color had totally drained from my face.

With my condition deteriorating, Nico and Jeff said that I needed to eat something so I could start taking Diamox. The Peace Corps Med Unit provided us with this to help against the symptoms of altitude sickness. The guides suggested that as long as we hadn't started taking it at the beginning of the hike, to hold off until we absolutely needed it. I had reached that point. The smell of the banana made me sick, so I opted for some biscuit packed in our lunchbox for the day. Matt helped me out of my wet jacket and bundled me up in a new dry layer from my daypack. He put a hat on my head to keep it dry because the new layer had no hood. Nico took my pack and helped me to my feet. I've never felt so helpless in my life.

Arm in arm with Nico, we rushed down a steep decline made up of loose rocks of all sizes. During some season it must be an active mountain stream, because we walked over trickling rivers all the way down. Altitude sickness for me had the following symptoms: I had no sense of balance, my head was pounding (literally), and I felt super lethargic and sick; making our descent was really frightening.

I felt slightly better the more we walked. We were just about to Barranco Hut when it started pouring again. We stood on the stairs to the office waiting to sign in, as we did upon arriving at each new camp. I looked out at a less bleak landscape than this morning and rested my head against the railing. I told Will that I didn't know if I could continue if this is how I was going to feel. We made our way to our already assembled tent and I crawled in, curled up, and tried to rest.

When the rain stopped, most hikers started to come out of their tents to look around at the nicest campsite we'd stayed at so far. A big beautiful rainbow had formed in the sky right next to us. Maybe this was the hopeful sign that I needed.

At dinner that night, our chef Walter made us a cake for dessert. Keep in mind, they're cooking over a gas burner. He told us it took him about 20 minutes to make. It was a thoughtful end to a dispiriting day.