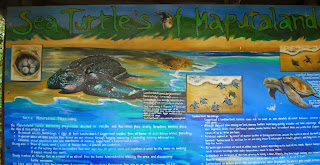 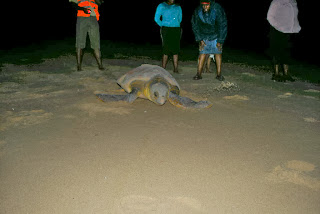 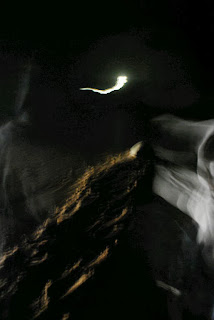 I had been counting down the days to Thursday 5 December for a few weeks now. It was on that evening that I went on an adventure to witness the nesting turtles of the northern coast of KZN.

Besides the fact that it was a really exciting thing to do, I think the choice of the word "adventure" here really fits. I live almost right on the coast of the Indian Ocean (probably less than 15 km as the crow flies), but the journey to get to the beach took us 2 hours. It's been raining a lot in this area lately, which proved to be both a benefit and a threat to the vehicle that we traveled in. Driving on roads made of deep sand is kind of comparable to driving on snowy roads in the Hudson Valley, without the icy, slippery factor. The recent rains helped pack down that sand, making it more easily maneuverable and making it so we didn't get stuck in it and have to push the bakkie out; therefore, a benefit. However, with constant rains come puddles that look like craters or small lakes on roads that are "paved" with loose gravel and dirt. When combined with hills, this is where we had to worry about getting stuck. Fortunately we only reaped the benefits.

I had asked my Baba at least a month back if he could tell me anything about guided tours to see nesting turtles. Based on the research I'd been doing, I learned that nesting is from November- January/February, and that northern Elephant Coast in South Africa is one of (if not THE) best places to see the turtles. We got to talking and he told me that his brother (who knows what the actual relation is) works for Kosi Forest Lodge, a high-end lodge that leads these types of tours, and that he would ask him what he knew. "I've lived here my whole life and have never seen these turtles," Baba told me.

So when all was said and done, our turtle team was 7: Baba, Mama, Zwelethu, Mabonga, me, and Baba's friend and his wife. We drove to Bhanga Nek beach and met our guide at 7pm as it was starting to get dark. He introduced himself as Agrippa, and said he'd been giving tours for the past 6 years. Before we started walking, he told us a little about the turtles we may see: the loggerhead and the leatherback. The loggerhead is more commonly seen, while the enormous leatherback is more of a rarity. According to the beautifully painted info sign where we parked, the leatherback is "critically endangered," while the loggerhead is "endangered."

Also included in our pre-walk talk were instructions about lights. I came prepared with my stronger headlamp, only to be told that I couldn't really use it. The turtles do not like lights, and we were told we absolutely cannot use them unless told otherwise at a specific moment. The lights make the turtles feel vulnerable, so if they see them when just exiting the water or even after making it to the top of a dune to nest, they may very well retreat back into the water, disrupting the entire nesting cycle. As bummed as I was, I respected the rules. And also got some pretty cool shots later on.

We began our walk in total darkness. The beaches of north KZN/ Maputaland/ Elephant Coast are the most pristine, isolated, untouched beaches I have ever seen. There are no lodges, no boats, no trash, and when I've gone, along with my friends, we've been the only ones for as far as the eye can see. Coupled with the fact that it was cloudy and starless, this was one of the most eerie walks I'd ever been on. I could hear and see the white of crashing waves to one side, and the silhouetted tree line of the dunes on the other, and that was all. It was oddly liberating walking around in this darkness, after we've been warned countless times by Peace Corps about mambas, hippos, scorpions, etc.

We saw several sets of turtle tracks before we found the turtle that they belonged to. When we found her, the turtle was just beginning to dig her nest, so we sat and waited for almost 30 minutes to make sure we didn't disturb or frighten her. We sat and watched a passing cruise ship out at sea. I had almost fallen asleep when Agrippa told us it was okay to come up the dune to see our new friend. We were not allowed to stand near her head for fear of frightening her, so instead we watched her lay dozens of eggs. We stayed with her until she finished laying her eggs, covered up her nest, and made her way back down to the water. As the first waves washed up onto her shell, everyone said goodbye and wished her well. (The pictures attached to this post are in chronological order, from laying eggs to returning to the sea).

Baba asked me several times that evening if I was happy and enjoying myself, and each time I answered yes of course. But what made me happiest was how much everyone else was enjoying themselves. There are so many amazing things to do and see here and I feel like so many people who live in this area don't take advantage of it because they don't have the means, one way or another. So I'm glad that we shared this experience together and were all able to see something beautiful and spectacular taking place.