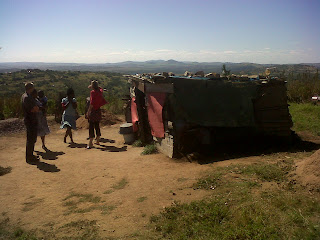 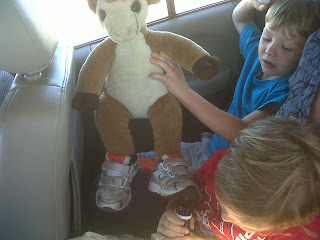 I'm not usually one to write about weekends away, but this one is definitely worth it.

Will and I hadn't seen each other in three weeks, which of course felt like three months. We met up in Empangeni, about three hours or so from each of our sites; our halfway point. He had found a super affordable place for us to stay a little ways outside the city and we were picked up by one of the owners in the late afternoon.

We hopped into Shelley Bain's jeep knowing a little bit about the non-profit organization that the backpackers was associated with. We knew that the Izulu Orphan Project worked with orphans, widows, and those living with HIV/AIDS. But that was only the beginning.

Shelley picked us up and immediately started talking about the org. She told us about her son, Chadd, the mastermind behind the Project's inception. When he was younger "he would just take the jeep and drive around. He would see children walking on the side of the road and ask to take them to their homes. When he got there, he'd ask why they weren't in school." He found that their parent was sick and unable to work, so the children would be doing adult-type chores or duties.

The more he drove, the more he discovered. One day he found sponsors to build a clinic. Then he was building Creches (preschools). And then he was giving out extra food from bread factories and supermarkets. He married his wife Kate in the mid-2000s and their honeymoon was a 3-month drive through the African continent in the Land Rover.

Sitting in the backseat of the Jeep, all I wanted to do was meet this incredible man. I was about to ask if we would over the course of the weekend, but didn't want to interrupt the momentum of the story. A few minutes later, we learned that Chadd had been tragically killed in early December 2009.

On Saturday afternoon, Shelley took Will and I on a tour of some of the Project's present undertakings. We saw a newly constructed health clinic for HIV/AIDS testing and the building next to it that would soon be a small computer lab. We saw a Creche painted with zoo animals by volunteers and decorated with the handprints of its tiny learners. And we saw a structure inhabited by a woman and her son that used to be a chicken coop, after their house had collapsed. Shelley showed us the foundation that had been dug for a new home, one fit for humans. (The picture attached to this post is that chicken coop house.)

A little later in the afternoon, we met Jedd (7) and Kadde (4), Chadd and Kate's biological sons. (I use the word biological here because they also have two foster children, Mbali and Sandile). These boys had more energy than any kids I've met lately. I sat in the backseat with them as they put Kadde's shoes on the stuffed springbok toy, counted the number of seconds in nine minutes, and told us how they drive go-karts "like a champion." (The other picture is of the boys with the springbok.)

This whole weekend was pretty unfathomable. How something so tragic as a fatal motorbike accident could happen to someone whose heart is five times the size of a normal human's because it's so full of love. How these boys won't know their father. How Kate and Shelley and Peter carry on and continue to build up the community around them when they could ignore it and accept it like so many people in this country do.

It took me all weekend to walk up to the framed and enlarged front page of the Zululand Observer from December 10, 2009 to read about Chadd: his life, his mindset, his achievements. I feel gracious for having come into contact with such truly beautiful people. (Take a look at this post by Kate if you've got a minute: thehappywafrican.wordpress.com/2010/08/26/an-open-letter-from-kate-bain-at-izulu-orphan-projects/)

Will and I met halfway to learn about a man who went all the way. And I'm so glad we did.